A Presumption of Shared Parenting? Don’t Ignore the Feminists! 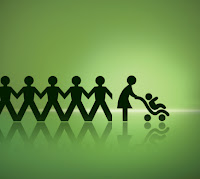 A government consultation has been set up proposing to introduce a presumption of shared parenting when families separate.  The sub-text is to give fathers a more equal footing when fighting for joint custody but is there also a feminist argument to support the government’s new proposals?

What do you think? Vote in the poll!

So what is the feminism angle and why is it being ignored?

One major achievement of the various feminist movements over the last hundred and fifty odd years has been to get women out of the private sphere (home and family) and into in the public sphere (commerce and politics).  The battle is on-going with the most recent drive being to get more women taking roles at the top of their professions, whether that is acting on company boards or having senior judicial roles.  Achieving equality on the public stage has evolved with the concept that the private life need not suffer, the idea that women really can ‘have it all’.  Think of Nicola Horlick who was dubbed ‘Superwoman’ for her ability to juggle a high profile City job with being a mother to 6 children.

This progress is great but, like it or not, when it comes to arguments over who gets the kids, the old stereotypes invariably resurface and the more we prefer one parent over the other then the more we are reinforcing those stereotypes.

The government consultation has not been welcomed by many family law practitioners who claim that the courts are already giving adequate consideration to shared parenting because it is accepted that it is in the best interests of the child to have both parents fully involved in their lives.  That’s all very well but is it enough to rely on the judges to uphold shared parenting without the additional clout of legislation?  I have sat in court for a case where the attitude of the mother and her lawyers was so entrenched in the idea that the mother was the primary carer that no one had really bothered to look at the role that the father played in the children’s lives (claimed to be equal).  Even the court did not question the mother’s assertion until it was disputed by the other side.  The presumption appeared to be that the mother was the primary carer and the father should be out earning the money.  Surely starting from the presumption that both parents are involved is better, even if you do then have to depart from it later on?

Assuming the aim is to achieve equality and not superiority, then the feminist argument here must be that, in order to support the continued progress of women being accepted as equals in the public sphere, there needs to be a presumption that men can make the same progress and achieve equal status in the private sphere by taking on an equal responsibility for, and participation in, the upbringing of the children.  Many father’s want to be more involved in their children’s lives and Families Need Fathers were quick to support the government’s proposals.

It seems that women really do want it all, an equal foothold in the public sphere whilst maintaining a monopoly over the private sphere.