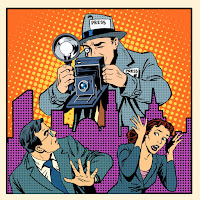 We are entitled to a certain amount of privacy. This is enshrined and supported by Article 8 of the European Convention on Human Rights.

The act of marriage itself though is not private. It must take place in a public building, notice must be given and witnesses must be present. Beyond that, however, no one else is entitled to know the details of how a couple conduct their marriage unless, that is, they choose to share them or they live out their private lives in the public sphere.

Divorce also requires a certain amount of publicity. Court proceedings must be started and the marriage is brought to an end first by the grant of decree nisi and finally by the granting of a decree absolute at least six weeks later. Information on the making of these orders is available to the public. The procedural side of a divorce is seldom contentious with court proceedings relating to the division of finances or child care arrangements being much more likely.

Financial proceedings require a comprehensive and invasive look into the financial lives of both parties. The standard of disclosure is high. The Court requires a full, frank and honest picture of the parties economic life to be able to adjudicate on a fair outcome. The standard format to provide this disclosure (Form E) runs to 28 pages and requires documents to be attached which include recent payslips, banks statements and pension information.

In order to protect the parties’ right to privacy, financial proceedings are heard in private but there are circumstances in which they may be opened up. These were considered by Mr Justice Mostyn last year in Appleton & Gallagher v News Group Newspapers and PA [2015] EWHC 2689 (Fam).

The case related to the financial proceedings in the divorce of Nicole Appleton and Liam Gallagher in which they jointly made application to exclude the press from the financial proceedings. There was a great deal of public interest in their divorce due to the celebrity status of the couple. In the case of most divorces the press will have little interest in attending a hearing but when celebrities divorce the case is very different. Mostyn J reviewed the legal position and frame work for considering when the press should be allowed access to such proceedings and, if so, to what extent.

The legal position is found in Family Proceedure Rule 27.11 which states that all hearings are held in private, this prevents the public from attending. FPR 27.11(2) provides a list of who may be present at these private hearings, which includes “duly accredited representatives of [the press]”. It should be noted that the court also has the power to exclude any member of the press, or indeed anyone else, if it sees fit (FPR 27.11(3)).

The press are also limited as to how they report the case. It is a contempt of court if they repeat outside of court anything that is said before the court. This applies to the parties as well. The press are also not allowed access to any documents. So the parties can be assured that journalists will not be able to go through their bank statements. Indeed, Mostyn J commented that, when the press is allowed to attend a hearing, their presence is more akin to that of an observer or watchdog.

What then of the judgement itself? Matrimonial judgments do not have to be made public by virtue of the Judicial Proceedings (Regulation of Reports) Act 1926. Such judgments can contain a great deal of personal information which would undoubtedly be an invasive breach of the right to privacy of the parties. That breach is not, in itself, a bar to judgments being published. The court must balance the parties’ right to privacy against the right of freedom of expression. In family proceedings a great deal of weight is given to the right of privacy but this can be countered where:

These issues do not just apply to celebrities. Shortly after his decision judgment in Appleton& Gallagher, Mostyn J made public a judgment in financial proceedings which involved no element of celebrity and no information about the case was already in circulation. The case was Veluppillai & Others v Veluppillai[2015] EWHC 3095 (Fam) which involved a husband who was a litigant in person and whose conduct throughout the case had been particularly bad. At paragraph 17 of his judgement Mostyn J stated:

“There is no doubt the husband's misconduct has been at the extreme end of the spectrum. It is in the public interest for his conduct to be exposed. The public should be aware of the scale of problems that courts administering justice and implementing the rule of law have to face at the hands of unrepresented and malevolent litigants determined to do everything they can to destroy the process. I appreciate that the wife, who is wholly innocent, will lose her rights to privacy by virtue of this judgment being published without anonymisation but in my opinion the public interest in the whole truth being known outweighs her privacy rights.”
This shows that, when considering whether or not to publish a judgment, the balancing act is not just between the right to privacy and freedom of expression but also extends to the public interest and can be applied to any case being considered by the courts.

Arguably, there will always be some uncertainty as to what private information may be made public if a case goes to a final hearing. Different approaches between judges adds to that uncertainty and there are calls for further guidance to clarify the position. If nothing else, this issue highlights the benefits of resolving financial claims outside of court.

This post is based on an article written for the Spring Law Update, February 2016. You can read the original article here.